Click on the image for the full-size cartoon and story...

You know, just when you think you've seen it all at Wrigley Field.

Somewhere around the 7th or 8th during an Astros game, I'm in the men's room.

I'm sure you've heard the descriptions or even been there, but the layout includes a sort of 5' tall wall in the center of the room, and along both sides are long, metal troughs.

So, you wouldn't call this a place with alot of privacy.

Etiquette demands you look up or maybe straight ahead at the guy across from you.

But out of the corner of my eye I thought the guy next to me was looking in a little mirror or something weird.

Guy was writing an email.

Just hangin' free, both hands emailing away and peeing at the same time.

He was so engrossed he didn't notice me staring.

On one hand, maybe it was admirable: not wasting baseball-viewing time with emailing.

On the other hand, he was probably on Twitter, writing "I am peeing in the men's room at Wrigley..."

But without either hand, it was just plain gross.

I scooched down away from him since I was wearing flip-flops.

Tim Souers is the illustrator and author of Cubby Blue and appreciates the opportunity to guest blog here at The Cub Reporter.
http://www.cubby-blue.com 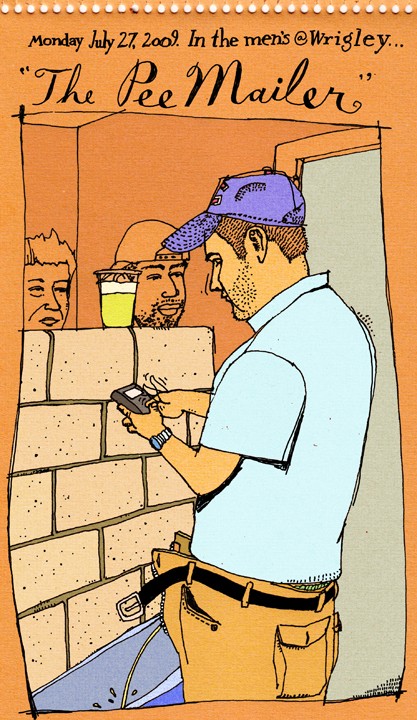 Submitted by Old and Blue  on Sun, 08/09/2009 - 1:48am  Permalink
nice cartoon but if it is supposed to be Wrigley shouldn't there be an Alien or Predator type thing coming screaming out of the toilet and cutting his nads off with huge incisors?

Submitted by Cubster  on Sun, 08/09/2009 - 10:32am  Permalink
didn't Illinois legislature just pass a law prohibiting this? Illinois House Bill 71 This bill was approved by the House and Senate in May of 2009 and now (July of 2009) and just signed into law by the Governor. House Bill 71, titled "Use of Electronic Communication Devices While Peeing" on the National Conference of State Legislatures NCLS website amends the Illinois code to prohibit the use of electronic communication devices while trough urinating, specifically. http://tinyurl.com/mabkhd

Submitted by Rob G.  on Sun, 08/09/2009 - 1:49pm  Permalink
i was suppose to post that one last week, but techinical difficulties and me going on vacation prevented it.

Submitted by Sweet Lou  on Sun, 08/09/2009 - 12:10pm  Permalink
Might it be a good idea for the Cubs to make a run at John Smoltz? He was DFA'd earlier this week. True, he's been piss poor for the Red Sox this year, but he's been relatively effective the first time through the line up in his eight starts. Maybe he could be effective in the Cubs bullpen. Plus, he'd be cheap. Boston will be on the hook for the majority of his $5.5 million contract. I don't know what it would take to get Smoltz, but I can't imagine it would be much.

Submitted by Sweet Lou  on Sun, 08/09/2009 - 1:00pm  Permalink
You're right, TJ. I don't know what I was thinking. Someone is going to have to help me on the rules surrounding DFAs. Does Smoltz have to accept the DFA? I'm almost positive he doesn't because of his year of service. If he refuses the DFA, does he become a FA at that point? Once he's a FA, is Boston on the hook any longer for his contract? I think my original thoughts were that once he was DFA'd, he could be dealt without clearing waivers. However, I think I was wrong.

Submitted by navigator  on Sun, 08/09/2009 - 12:56pm  Permalink
RICH HILL had his labrum surgery and as it turned out his shoulder wasn't as bad as previously thought once they got a look. http://www.baltimoresun.com/sports/orioles/ba...

Submitted by retrofade  on Sun, 08/09/2009 - 2:42pm  Permalink
Vintage Lou today on the ridiculous blown call on the double play in the second. Thanks umpires... not only can we not keep the team healthy, but we have the umpires playing against us too.

Submitted by Old and Blue  on Sun, 08/09/2009 - 6:37pm  Permalink
BTW, I really hate the fucking Cardinals. I'd like to see St. Louis drop its dirty wad into the Mississippi and float into the gulf and get blown up by colliding into a fucking oil rig. Other than that I'm feeling pretty well at peace.

Submitted by Doug Dascenzo  on Sun, 08/09/2009 - 6:53pm  Permalink
It's funny how having far-and-away the best player in baseball tends to make your team a contender every year, regardless of what's around him. Sucks for us.

Submitted by Rob G.  on Sun, 08/09/2009 - 7:03pm  Permalink
http://danny-knobler.blogs.cbssports.com/mcc/... also thinks WSox put claim in on Rios, Blue Jays won't move him unless they get something worthwhile for him. Retards. Rays putting a lot of claims in on low-salary players to block Rsox/Yanks... and please take a new photo Danny Knobler...

Submitted by The Real Neal  on Sun, 08/09/2009 - 7:56pm  Permalink
I would really be shocked if Rios gets pulled off of waivers. They have Snider waiting. Maybe Riccardi just can't admit to himself that he made a bad deal.

If he refuses the DFA, does he become a FA at that point? Once he's a FA, is Boston on the hook any longer for his contract?

I think my original thoughts were that once he was DFA'd, he could be dealt without clearing waivers. However, I think I was wrong.

SWEET LOU: When a player is "Designated for Assignment" (DFA'd) it actually means he was placed on his club's Designated List. A player cannot refuse this assignment.

When a club places a player on the Designated List, it has ten days to either trade, release, or outright the player to the minors. (NOTE: If the player is not replaced on the 40-man roster by another player and if the player has minor league options remaining, he could be optioned to the minors, but that is rare).

During the ten days the player is on the Designated List, his club will try and trade the player and get something of value back in return (a player and/or cash). If the player isn't traded within ten days, the club has to place the player either on Outright Assignment Waivers or Outright Release Waivers, but if the player has at least five years of MLB Service Time, the player MUST be placed on Release Waivers because players with at least five years of MLB Service Time have the right to refuse an Outright Assignment to the minors and be returned to both the 25-man and 40-man roster, which obviously can't be done if the player was Designated for Assignment. (A player who is Designated for Assignment actually has to be traded within eight days, because it takes two days for a player to clear waivers).

Smoltz has way more than five years of MLB Service Time, so the Red Sox only option would be to trade or release him. So if Smoltz is not traded within eight days (and to get traded now he would also have to clear Trade Assignment Waivers because the July 31st non-waiver trade deadline has passed), he would have to be placed on Release Waivers.

If a player is placed on Release Waivers and is not claimed, he becomes a free-agent and can sign with any club (this happened recently with B. J. Ryan), and the player's former club is responsible for paying the player's remaining salary minus the pro-rated portion of the MLB minimum salary that is paid by the player's new club.


39 players are on MLB RESERVE LIST (one slot is open)