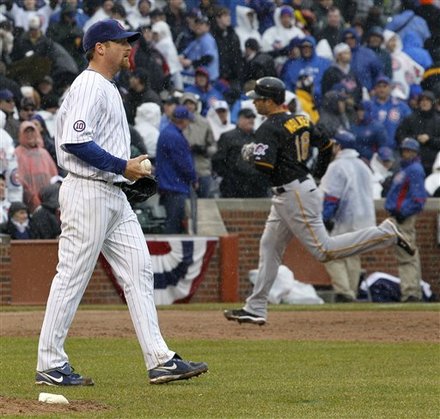 The Good: Fukudome got on-base 3 times out of the leadoff spot, Castro went 3 for 5, Pena got on-base twice with an RBI and and multi-hit games by Ramirez and Barney as well. Ramirez also just missed a 3-run game tying homer in the 7th. Dempster looked like a good pitcher for the first 4 innings and did strike out 7 on the game. Castro made an awesome dive to turn a double play to save Samardzija's ass. Some aggressive baserunning by Castro and DeJesus helped score the first run. The team pounded out 10 singles.

The Bad: No extra-base hits and just two walks by the offense, Barney got thrown out by Ryan Doumit and there was the 5th inning. After a leadoff single by Ryan Doumit, Dempster faces Garrett Jones. A hit and run is called and Jones fouls it off. Next pitch, no hit and run and a chopper to third that Aramis had a play at second base on and never takes a look and tosses it to first. He probably doesn't have a double play there, but you should always go after the lead runner of course. Then a walk to Ronny Cedeno which is a feat in of itself and maybe Dempster isn't so keen to pitch out of the zone against Cedeno if first base is occupied. Bob Brenly attempts to justify this by saying that it now sets up a possible double play with the pitcher up. It also sets up an sacrifice attempt and two runners in scoring position with the top of the order coming up. Tabata walks and then Neil Walker comes up. The count goes 3-2 and Dempster throws a splitter that Walker fouls off. Even if he keeps that it play, it may go for a single, but at worst it's a tie game. For some inexplicable reason, Dempster goes fastball next time and judging by the replay didn't miss his spot by too much and leaves one right in the lefty happy zone. Blame Soto, blame Dempster, blame Mark Riggins, but sweet jeebus was that a terrible pitch.

After two more walks in the 6th by Dempster and what looked like he was losing a little velocity, Q-Ball decides to keep him out in the 7th claiming that he thought he was fine and Dempster earned the right to tell him if he was done. He also cited that he liked how he finished up the 6th with Cedeno. *Facepalm*

Jeff Samardzija pitched an inning with the game still within 3 runs.

Aramis Ramirez blasted a one-out, two-run homer in the bottom of the 11th to lead the Cubs to a 4-2 win over the Rockies Monday night at Wrigley. Lou Piniella's post-game press conference, the main topic of which was a player who never even appeared in the game, was at least as newsworthy as the main event.

First about the game:

The Cubs had leads of 1-0 and 2-1 courtesy of run-scoring singles by Aramis Ramirez and Koyie Hill, before the Rockies tied the game in the 8th inning on a single and three walks, two by John Grabow and one by Carlos Marmol. Marmol redeemed himself by inducing an inning-ending double play, nicely initiated by Starlin Castro, to preserve the tie.

The Cubs lost for the sixth time in seven tries as the Marlins scored three times in the 7th inning to overcome a 2-1 Cub lead and go on to win 4-2 at Wrigley Field.

You wouldn't think a team could pack so much failure into a simple 4-2 loss, but well...

Sobering thought...the Cubs just got beat 2 of 3 at home by the worst team in baseball the last two years. Sure, anyone can win a 3-game set, but the Cubs sure didn't look like a better team at any moment in this series. And yes, the Nats are a better team this year than year's past, but they also were missing Ryan Zimmermann for the set. All of that is just a convoluted way of saying that the tea leaves aren't really predicting a bright 2010 future at the moment for the Cubs.

The Good: The Cubs walked 4 times(Colvin, Fukudome x2 and Nady) and had 9 hits including Theriot and Fukudome getting on-base 5 times in total. Dempster had a solid 8 IP, 3 ER affair with just one walk and 6 K's. Marlon Byrd's circus catch losing the ball in the sun. I wonder how the media and crowd reacts if he doesn't make that catch as they were sure quick to jump on Bradley last year for losing the ball in the sun.

I think that was the first game I got to watch in its near entirety in about 2 weeks. My apologies for the outcome.

The Good: After Gorzelanny finished his warm-ups, he mowed the Nationals down through 7 innings. The problem was it took him 3 batters into the game to finish loosening up. Geovany Soto went 2/4 and Kosuke Fukudome reached base 3 times, twice on walks to set-up getting stranded by Lee, Byrd and Ramirez. Soto also gunned down two very capable baserunners in Wily Taveras and Justin Maxwell.

Here's the ugly box score, and here are some details...

The good: Randy Wells allowed just one scratch run over six innings, yielding six singles and a couple walks while fanning five. At the plate, Wells delivered two singles of his own, one of which figured in the mini rally that netted the Cubs' only run of the game. Also, Marlon Byrd, moved up to the leadoff spot in Lou Piniella's new-look batting order against southpaws, collected three hits and the only Chicago RBI of the night.

The bad: Where to begin?

The Cubs come back in dramatic fashion with four runs in the eighth with the entire rally starting with two outs - taking a second straight from the Brewers. I don't know what the joke is, but the punch line was once again LaTroy Hawkins.